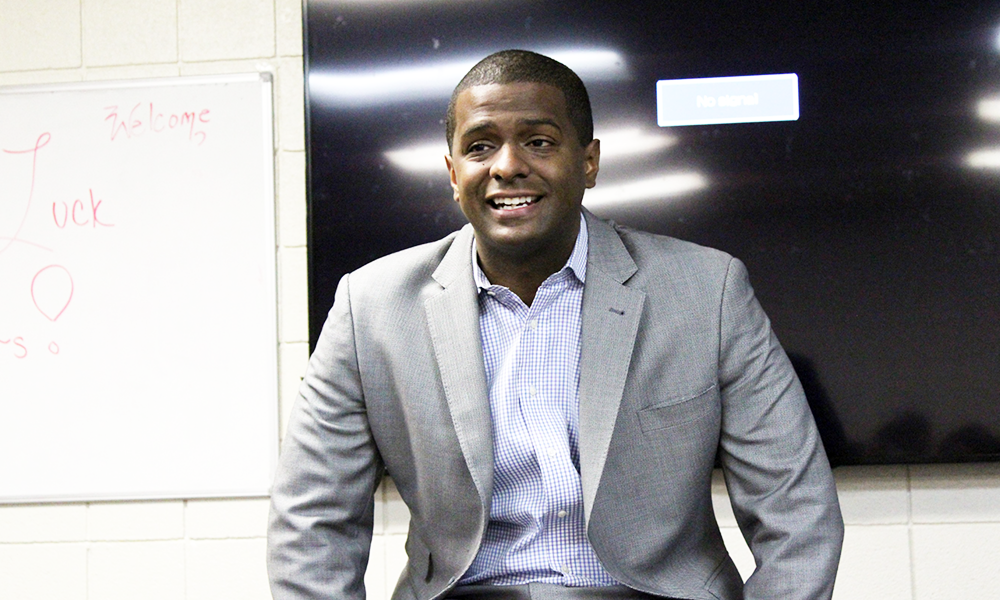 Bakari Sellers predicted a win for Democrats in the House of Representatives and a Senate minority outcome after the midterm elections, at a news conference on Oct. 30.

Sellers, a political analyst at CNN, spoke mainly about the upcoming midterm elections at the news conference with Claflin University’s reporting class.

Regarding the congressional race for the House of Representatives, Sellers said the Democrats will lead the way.

“The House is going to flip because of white, college-educated suburban women,” Sellers said. This demographic is “put out” with the current administration.

The suburban votes in major cities like Philadelphia and Los Angeles are very crucial in determining the outcome of the elections, Sellers said. But until results from California come in, there is still uncertainty, he said.

If the Democrats recapture the House, Sellers think they will move to investigate President Donald Trump.

“But I hope their priorities are: repairing the affordable care act; improving the tax bill so that it doesn’t just benefit the top one percent, and we would like to take a peek into Trump’s tax records,” Sellers said.

A win for the Republicans, he said, will most likely be that they would still hold the Senate majority after the Nov. 6 midterm elections.

“I don’t think the Democrats will win the Senate, but I think it’ll be closer than what people give them credit for,” Sellers said.

While the Democrats might struggle in Maryland, Georgia, Tennessee and South Dakota, he said states like Michigan, West Virginia, Arizona, Nevada and Florida will be definite wins for them.

“I think that Andrew Gillum will win,” Sellers said. “If Andrew wins, Nelson wins, a lot of people in Florida win.”

A poll by the University of Florida showed the two senatorial candidates, Democratic Sen. Bill Nelson and Republican Gov. Rick Scott, at a tie with 45% of voters likely to vote for each candidate.

Gillum, who is the mayor of Tallahassee, Florida, and the Democratic gubernatorial candidate for the state, is running against Rep. Ron DeSantis.

According to the poll, 47% of likely Florida voters plan to vote for Gillum while 43% will vote for DeSantis.

There seems to be a blue wave washing over Florida with Gillum’s increasing popularity. It has been over 20 years since Florida elected a Democratic governor in 1990. But Sellers thinks waves are just “political talk.”

“I think the only wave that you’ll see, for example, is a wave that will catch people in Florida and skip people in South Carolina,” Sellers said.

Not many people in South Carolina are excited about the elections, he said.

The Post and Courier reported that Democratic candidate for governor, James Smith, is falling behind his opponent, Republican Gov. Henry McMaster, at the polls.

Sellers said, “If there was a Democrat who could win, the Democrat would have the profile of James Smith.” But he thinks it will be a tedious uphill battle.

“I do think that, in order of people who have the best probability to win, it goes: Joe Cunningham, Constance Anastopoulo, and then James Smith.”

Cunningham is a first-time political candidate running in the congressional race against Republican Katie Arrington.

Sellers said most people would probably leave the ballot for attorney general blank. “She’s running against probably the weakest statewide candidate we’ve had in a long time.”

Even though the election races in South Carolina might seem dull now, Sellers said young people still have to vote.

“If voting wasn’t so important, why do you think they try so hard to take it away from you?” he asked. “Every year they make it harder for people to vote, for young people to vote.”

He said young people need to talk more about things that matter to them, like: college education, student loans, healthcare, taxes, unemployment and job searches.

“Those are things that directly affect you,” Sellers said. “For you all who are college students, who are on this journey and educated, you guys have to begin to talk to your peers and your classmates about voting.”