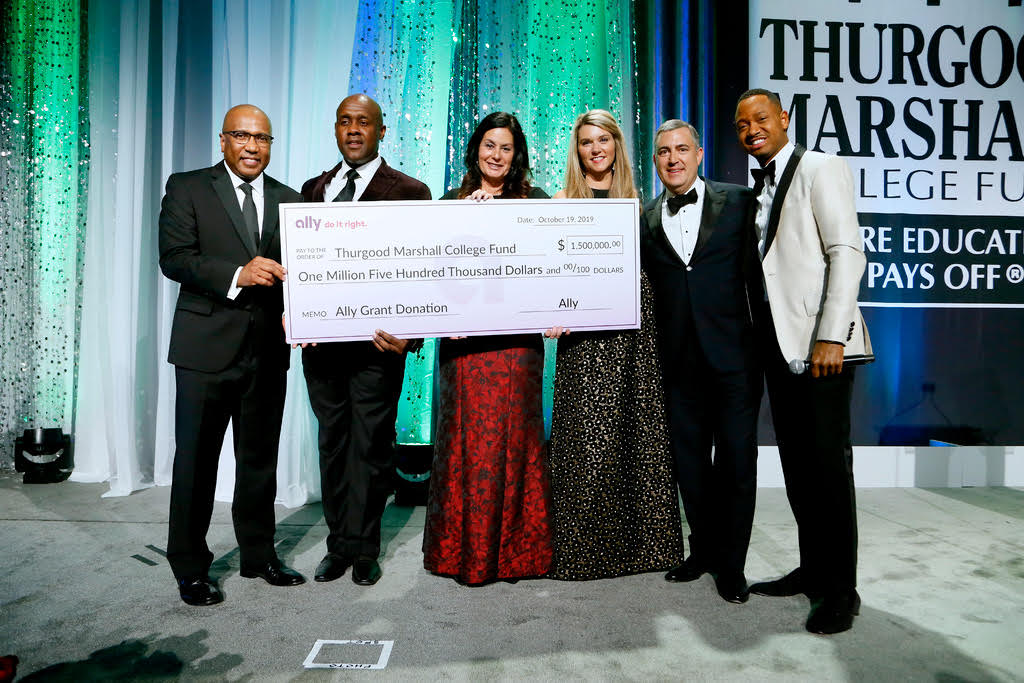 Donors in the room and online raised $109,000 at the 32nd Anniversary Awards Gala

In a surprise announcement, Ally Financial Inc. presented TMCF President & CEO, Harry L. Williams with a check for $1.5M bringing the overall fundraising total for the weekend to more than $5.8M at the time of the release, with proceeds supporting scholarships and programmatic support for nearly 300,000 students at TMCF member-schools.

“Every year I am so impressed by the level of support TMCF receives from every student, individual, corporation and organization that attends and supports our mission by donating and attending our gala,” said Harry L. Williams, TMCF president & CEO. “Ally has been a tremendous partner for TMCF. With Moguls in the Making, Ally internship programs, and their commitment as our gala presenting partner, I am grateful to them, and everyone who attended, and donated to help us ensure our HBCUs continue to thrive.”

TMCF National Ambassador Terrence J did a fantastic job as the host of this year’s gala where he also launched TMCF’s new fundraising initiative, the Forever Fund. Gifts to the Forever Fund help ensure the future of TMCF, as well as the futures of the thousands of talented students from our nation’s HBCUs and PBIs that we serve every year through our vital programs, services, and scholarships. Terrence J’s influence online and charisma in the room helped TMCF raise $109,000 that evening from donors in the room and via social media.  More than 450 HBCU students and 1,200 guests making up a collective “who’s who” from government, corporate, philanthropic, higher education and HBCU leaders were treated to a special performance by Kenny Lattimore, thanks to gala entertainment partner, Honda USA. VIP guest presenters included Candiace Dillard Bassett, Will Grandberry, Kára McCullough, Isha Sesay, and Markette Sheppard.

“We are incredibly proud at Ally to have formed a strong relationship with TMCF through the Moguls in the Making program,” said Ally Chief Executive Officer, Jeffrey J. Brown. “That experience has fueled a passion at our company for this organization and the work they do in nurturing the talent and potential of the HBCU community. We are excited to continue this journey together as we launch the second year for the Moguls in the Making program.”

ABOUT THE THURGOOD MARSHALL COLLEGE FUND

Established in 1987, the Thurgood Marshall College Fund (TMCF) is the nation’s largest organization exclusively representing the Black College Community. TMCF member-schools include the publicly-supported Historically Black Colleges and Universities and Predominantly Black Institutions, enrolling nearly 80% of all students attending black colleges and universities. Through scholarships, capacity building and research initiatives, innovative programs, and strategic partnerships, TMCF is a vital resource in the K-12 and higher education space. The organization is also the source of top employers seeking top talent for competitive internships and good jobs.