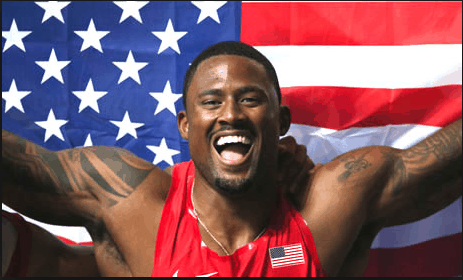 Passion. Pain. Purpose. These are all three qualities that ring true in testament to David Oliver’s track and field career. After leaving Denver, Colorado to attend Howard University, Oliver’s athletic career has become one of the University’s biggest success stories.

While at Howard, Oliver ran the 60 and 110 meter high hurdles for Michael Merritt. From 2001-2004 Oliver won 4 consecutive outdoor Mid-Eastern Athletic Conference titles, and was an indoor champion in the 60 meter hurdles in 2003.

“His personal achievements at the highest levels of competition were an example to other student-athletes of what they could achieve through hard work, dedication and passion for their craft,” said Director of Athletics, Kery Davis.

His efforts mainly stood out because college offered him a different experience than life at home.

Immediately he understood this was his opportunity for a better life. As a two sport collegiate athlete, Oliver knew that the day would come when he would have to choose between track and football. Though his physical abilities drew the attention of NFL teams, he knew his success in track and field was not to be short lived.

Just two years after graduating, Oliver won at the Internationales Stadionfest IAAF Golden League meet in Berlin and finished fifth at that year’s World Athletics Final. In 2007, he was second in the USA Indoor Track and Field Championships. And in 2008, he became an Olympic bronze medalist in the 110 meter hurdles. However, Oliver suffered from a severe calf injury in 2009. Though it was painful, Oliver viewed it as an opportunity to persevere.

“Without the disappointment of 2009, I wouldn’t have enjoyed the 2010 season – which was a year which propelled me to legendary status,” said Oliver.

On July 16, 2010, Oliver ran 12.89 in the 110 meter hurdles, which was the third fastest time ever. He also moved up to number six on the all-time lists in the 60 meter hurdles. By the time 2010 came to an end, Oliver was unbeaten in 15 finals races and held the top five times and eight of the top nine times in the world. Seven years and a couple titles later, Oliver found himself returning to the place he once called home but this time as the Director of Track and Field.

“Howard has done a great job providing a lot more resources to the student athletes who are here right now,” said Oliver. “They have more than what we had.”

In his first year as Director of Track and Field, Oliver saw Dominique Cleggett (long jump) and Uche Onuoha (400 meter hurdles) to the National Collegiate Athletic Association’s East Preliminary rounds. He hopes that during his tenure at Howard he can help more athletes rise to the national level of competition in addition to producing a few who rise to the Olympic level of success.

“Many people love to offer advice and change many things about their life, but for me I’d just say, “stay the course,” said Oliver. “Don’t wish to change anything because every setback you experience always serves a purpose.”