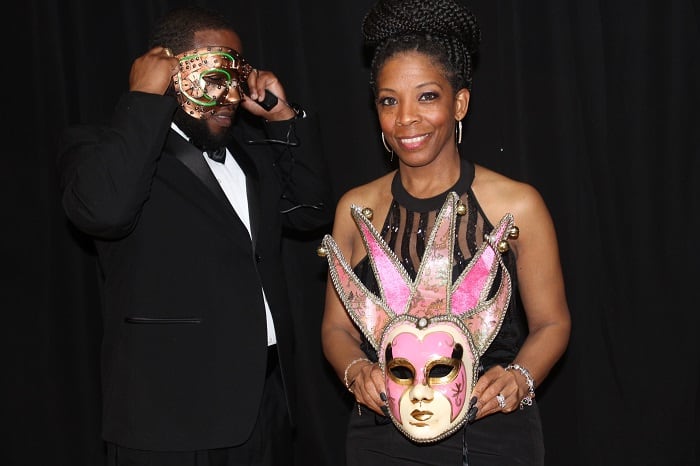 As guests arrived, they could notice the dim lighting and “Old Hollywood,” theme that illuminated the room. Everyone was dressed in elegant gowns and suits colorful mask as they sat at each table in fellowship with each other. The purpose of this event was to celebrate black excellence in the name of fun while also raising funding for students attending the college.

A collaborative unifying prayer over all pastors was observed.  Guests were greeted by Dr. Cheryl Evans Jones, President Paine College.

Following this dinner was served. Next, the 2020 masked ball honorees were recognized. Helene Carter, Vice-President of Institutional Advancement presented the Rise to the Challenge. Paine College Alums Dr. David Peterson ’56 and Mrs. Betty C. Peterson ’57 made a monumental gift of $1.8 million to Paine College on June 7, 2019.

This remarkable monetary gift helped to (defer) eliminate the outstanding debt on the HEAL Complex.

Following this, was the parade of masks.

The mask competition allows gala participants an opportunity to be creative and to show off their original mask while supporting a greater cause; free and reduced cost of education for its students.

Jay Jefferies asked the masked contest participants to reveal themselves behind the mask quite similar to the Fox television show, “The Mask Singer.”

Live entertainment from Hip Hop Artist Chubb Rock, R&B Singer CASE, Comedian Shuler King and Sounds Unlimited Band with TUTU D’vyne. Chubb Rock immersed himself in the middle of the floor in an effort of inclusivity for those who wanted to dance and rap along with his music selections. He performed the great hits such as “Brick House,” by The Commodores and comedian Shuler King lightened the mood as he told funny jokes.

Sounds Unlimited Band with Tutu D’vyne performed classic hits such as Michael Jackson’s, “Rock With You,”  “Closed with a Might Good Time.” Tutu D’vyne and the band invited audience members to take turns singing, “I’d Rather Live in your World.” A beautiful moment as couples began to get out of their seats to slow dance together.

CASE swooned the ladies with his hit songs such as, “Faded Pictures,”  “Happily Ever After,”  and “Missing You.”

In 2004 Murray graduated from Morehouse College and prepared for college as an Upward Bound student at Paine College from 1997-2000. “Paine College is necessary to open doors of education for African Americans in the CSRA, in Georgia, and Paine is worthy of more investment now than it has ever been.

My hopes are that Paine will grow stronger financially and get behind the steady leadership of Dr. Cheryl Evans Jones for a long tenure of her presidency.  I hope the philanthropic community in Augusta, the CSRA, Georgia, and the country will see the efforts of Paine and provide more support than ever before,” he said.

Murray spoke briefly at the gala to raise awareness about the steep cost of education for the future leaders of our world.

“Our Nation needs HBCUs, and we need Paine College specifically.  If it were not for Paine, Augusta, the CSRA would have 400 fewer jobs, and $33 million less of economic impact.  One single class of Paine’s graduates can expect to earn a combined amount of $274 million over their lifetime.  Therefore, Paine is essential.  While UNCF donates money to Paine, provides scholarship assistance to Paine’s students, and fights for congressional and appropriations support for Paine, we encourage everyone who cares about education in Georgia to donate funds to Paine, also!

If Paine raised any money, the gala was a success; but we encourage everyone who did not get a chance to attend to donate today,” Murray said.

Paine is Affiliated with the Christian Methodist  Episcopal Church and the United Methodist Church.  Paine College is also one of the colleges affiliated with UNCF programs. Paine remains as a liberal arts, coeducational, church-related institution.