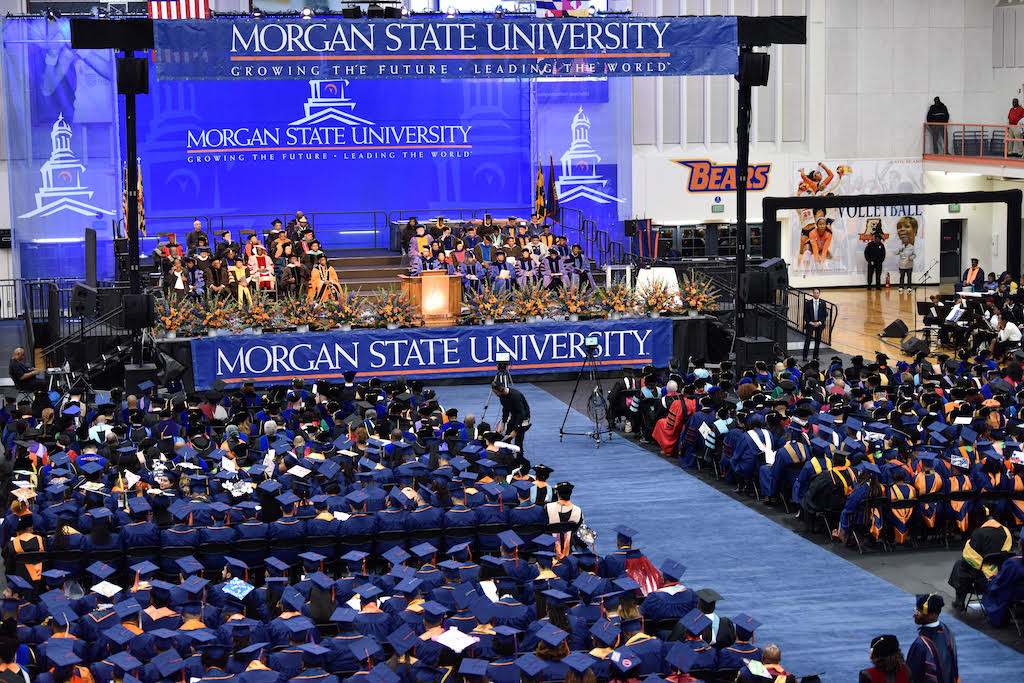 BALTIMORE, Md. – Pride was in the air on Friday, December 13, as nearly 500 bachelor’s, master’s and doctoral degree candidates, and hundreds of their supporters, braved a cold, rainy journey to Hill Field House for the Seventh Fall Commencement Exercises of Morgan State University. The third-ranking Democrat in the U.S. House of Representatives, Majority Whip James E. Clyburn of South Carolina, was the keynote speaker for the event, and communications technology expert Jesse E. Russell, a pioneer in the development of the cellphone’s wireless technology, was awarded an honorary Doctor of Science. The event marked a number of significant institutional milestones for the 152-year-old Historically Black Institution as well as notable personal milestones for many of this season’s graduates.

Kayla Huffman, from Randallstown, Maryland, and Jennai Charles, from Windsor, Connecticut, both received 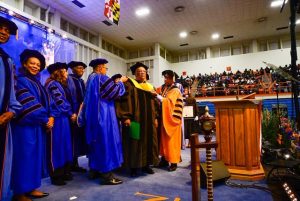 bachelor’s degrees in biology during the exercises and, like many of the candidates gathered in Morgan’s University Student Center before the ceremony, were happy to share their short-term career plans. Huffman plans to return to Walter Reed Army Institute of Research, where she did laboratory work as an undergraduate, and Charles has been accepted into the doctoral program at Notre Dame of Maryland University’s School of Pharmacy. Both praised their Morgan experience.

“I originally went to Towson University, and I transferred here to Morgan,” Huffman said. “(Morgan) was more open, more welcoming. I got closer to the staff than I did at my previous school. It was really helpful. I made a lot of friends…. It was just a better environment for me.”

“I wanted to go to an HBCU and get out of Connecticut,” said Charles.

Davon Rice, from Baltimore, was eager to receive his Master of Arts in Teaching and continue his work at Woodlawn High School in Baltimore County. He plans to come back to MSU to begin a doctoral program in education next year.

“I love Morgan. I went here for my undergrad degree as well,” Rice said. “Just the culture, convenience: everybody is on one accord. I love my school.”

Corin (“Tiny”) Adams had also returned to Morgan, after earning a bachelor’s at MSU in 2010. A former Bears Women’s Basketball player, she lived abroad before enrolling in the Master of Arts in journalism program.

“In the sports field, I love to tell stories,” Adams said. “I took to this field to learn how to do it the right way, so I can tell more comeback stories, perseverance stories, and try to inspire people.”

‘Never, Ever Give Up’

Adams’ words foreshadowed Congressman Clyburn’s address, in which he exhorted the soon-to-be graduates to be thankful for those who have supported their dreams and to persevere in their endeavors.

“You will not always get things right the first time you attempt it. Remember to never, ever give up,” Clyburn said. “…In order to be successful in life, you must never give up, and don’t hesitate to get outside of your comfort zone,” he continued, citing proof from African-American history, including his own political career, in which he failed in his first three runs for Congress.

Howard University Receives $4 Million Hopper-Dean Foundation Gift to Expand Prestigious Bison STEM Scholars Program
The older I get, the more evident it is that people today have less appreciation for things (or people) as they mature and age.