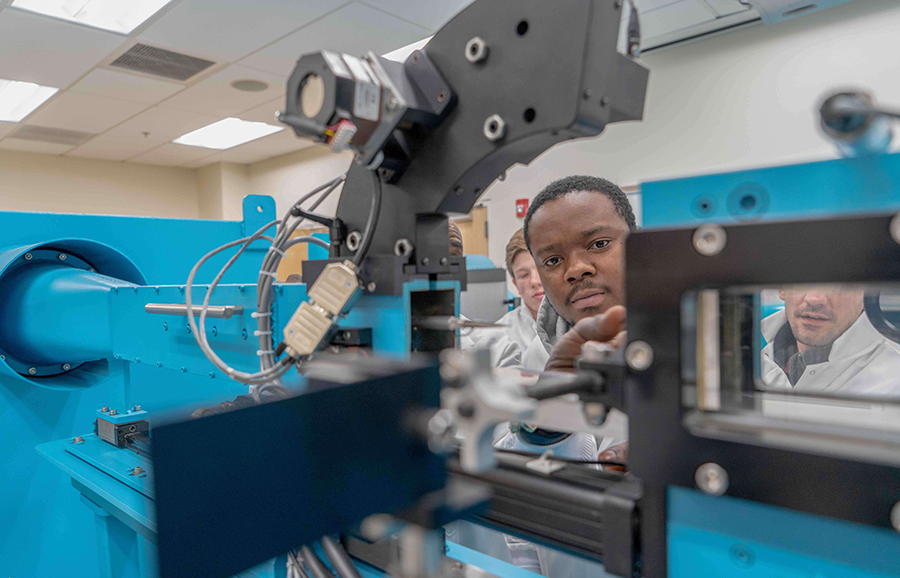 Morgan State University has secured a total of $35 million in new grant awards from the National Institutes of Health (NIH), the world’s largest public funder of biomedical research. The funding will be used to advance research being primarily conducted by faculty and students in the School of Computer, Mathematical and Natural Sciences (SCMNS), chiefly through continued support of the ASCEND program and the establishment of a new university center to reduce urban health disparities. The remaining grant resources will be allocated to support a variety of other important research initiatives emanating from the School’s Departments of Biology and Chemistry.

The largest NIH grant received in this latest group of awards is in the amount of $16.9 million and will be used to fund the second phase of the NIH Building Infrastructure Leading to Diversity (BUILD) grant program, or ASCEND as it is known on the campus of Morgan. ASCEND, which is an acronym for “A Student-Centered, Entrepreneurship Development,” is designed to train a diverse cadre of biomedical research leaders. The program takes a unique approach to preparing undergraduate students for entering the biomedical research workforce by providing them with leadership opportunities in the early stages of their research and encouraging the exchange of ideas. The first phase of ASCEND received $23.3 million in NIH funding, bringing the total to more than $40 million to date.

NIH’s National Institute on Minority Health and Health Disparities (NIMHD) awarded Morgan $14.2 million to establish a center for Urban Health Disparities Research and Innovation, henceforth to be known as RCMI@Morgan. Through RCMI@Morgan, the university will conduct research that develops solutions to enhance health for all citizens of Baltimore, but with an emphasis on eliminating health disparities between minority populations and others throughout the city. The center will look to build a robust infrastructure to support both laboratory-based and behavioral biomedical research for students and faculty. Its initial projects will focus on HIV/HCV disparities, smoking cessation and gene expression associated with poverty, all critical health issues affecting Baltimore. The remaining $3.7 million in NIH grants will be instrumental in funding other research initiatives housed within the SCMNS Biology and Chemistry Departments.

“As Maryland’s Preeminent Public Urban Research University, having a mutually beneficial relationship with an organization such as the National Institutes of Health opens the doors to opportunities and resources without which we would not be able to progress in our mission,” said Morgan State University President David Wilson. “Knowing that adequate resources are available is central to effectively evaluating what ails our urban population areas and putting forth the solutions to their challenges. These grants place our brilliant students and faculty in a better position to do the hard work required of a high-research university.”

How HBCU Alumni can Save Black Colleges
MOREHOUSE PIPELINE PROGRAM