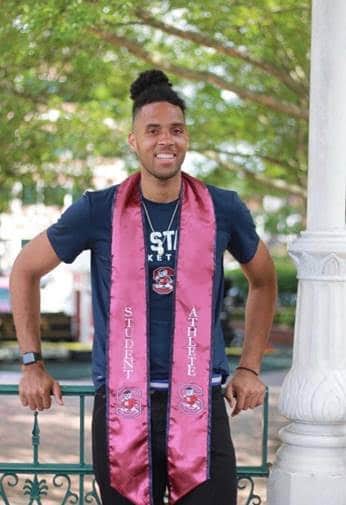 Graduates everywhere have a unique story to pass down to generations that follow. Although technology has been a significant part of everyday life for quite some time, in the age of Coronavirus, its use has become a necessity across all facets.

The class of 2020 has probably known for a while that technology would play a major role throughout their lives, but graduation had always been tangible, until this year. Despite not walking across a physical stage, graduates have not lost hope for their future. Former forward on SC State’s men’s basketball team, David Bottenberg, is proof that commitment survives adversity.

Bottenberg, a native of Rockville, Maryland, was dedicated to academic success long before the pandemic. He recently earned a Bachelor of Science degree in biology from SC State. He was also recently awarded the President James E. Clark Academic Excellence Award for $5,000 for maintaining a 4.0 GPA throughout his tenure at the university. He knew his accomplishments were substantial, but did not expect to be awarded with such generosity.

“It feels amazing and means a lot to be recognized like this,” Bottenberg said. “I thought I would probably be recognized during the (virtual) graduation ceremony, but I didn’t think something of this magnitude would happen. This should inspire other students to work hard because it’s definitely possible to maintain success academically.”

Bottenberg said he chose to major in biology because he knew he wanted to help other people. Also, as an athlete, he has always admired the capabilities of the body and enjoys science. He received a full scholarship from SC State; however, that is not the only reason he chose to attend. He was offered a full scholarship from another college back home in Maryland, but believed SC State would develop him more.

“I ultimately chose SC State because my family wouldn’t be there to help me get out of situations. I knew it (attending SC State) would help me become more independent. I also didn’t understand what an HBCU was really about, but having gone through it, I’m happy I chose to go. The class sizes, relationships with professors, the coaching- I feel I wouldn’t have gotten at any other school,” Bottenberg said.

For student-athletes, endurance is a requirement in the classroom and on the court, field or wherever they train and compete. Furthermore, balancing schoolwork, life and sports can be rewarding, making students more well-rounded.

Bottenberg was a four-year member on the Bulldog basketball team and appeared in over 110 games throughout his career. A key reserve during his tenure at SC State, he shot a team best- 87.5 percent from the free-throw line during his senior season.

He said he balanced everything by keeping a schedule on his phone, staying organized, and staying focused. He said he was not the type of student to attend every party, and when away games were over, he was in his room studying late.

While his love for basketball kept him fulfilled as an undergraduate, it is not the only thing that made his time at the university memorable. He also has a passion for tutoring and helped fellow students earn better grades in their math, statistics and physics classes. He hopes to continue tutoring in some way. Additionally, he completed various community service projects with the SC State men’s basketball team, including clearing debris caused by hurricane damage.

Where there is a success story, there is often a support system. Bottenberg spoke graciously of his mother, Christine Bottenberg, and his girlfriend, Victoria Brown, who is also a recent SC State graduate. He said his mother is the reason why he has made it so far and that he continues to be inspired by her story.

“My mom would give the clothes off her back to help me. She is the reason I’m in the position I’m in. She came from Nigeria. Seeing how she was able to come to America, overcome challenges and start a family is inspirational,” Bottenberg said.

His girlfriend had her share of challenges as a student as well, Bottenberg explained, but that did not stop her from encouraging him to overcome his obstacles.

“There were many times I stressed out, especially during my last semester, but my girlfriend urged me to stay focused. This last semester, I didn’t think I would get all A’s, but by the grace of God, I was able to finish it out and get all A’s,” he said.

He thanked his friends and other family members for standing by him as well.

The star graduate also thanked his former head basketball coach, Murray Garvin, for helping him develop as a basketball player and as a man.

“Playing basketball was a dream come true. I’m grateful that coach Garvin and the coaching staff gave me the opportunity to do so. Traveling to different states, I’ve had a lot of great memories and good moments on the basketball team that I’ll never forget,” Bottenberg said.

His former coach expressed how well Bottenberg has represented Bulldog basketball through his determination on and off of the court.

“David was a special student-athlete from the time he arrived on campus,” Garvin said. “At first, I was worried about him being a biology major while maintaining his basketball prowess. He proved me wrong his first semester when he achieved a 4.0 GPA while taking the toughest courses of any freshman in my 20 plus years of coaching collegiate basketball. After that, I never worried or questioned his grades again. Also, David was a model teammate, and his contribution to our program far outweighs his stats on the floor.”

“We are super proud of him. He represents what being a stellar student-athlete is all about,” Garvin continued.

Studying and staying home became a new reality during the 2020 spring semester.

Other than managing his schoolwork, the hardest part of the pandemic for Bottenberg has been having to stay home since he is an active person. His solution has been to run almost every day and find ways to stay in shape. His advice to other athletes is to work out in every way possible.

His advice to other graduates who are entering a job market that holds so much uncertainty is to keep going.

“We have to persist, and eventually, the economy will stabilize. We just have to keep grinding right now,” Bottenberg said.

When he is not exercising or playing basketball, Bottenberg is designing logos and other graphics. He has also developed a passion for photography and enjoys taking pictures.

The new SC State alumnus is not giving up on his dreams, despite COVID-19 delays in pro basketball and beyond. He is currently pursuing professional overseas basketball and plans to attend medical school after playing for a couple of years.