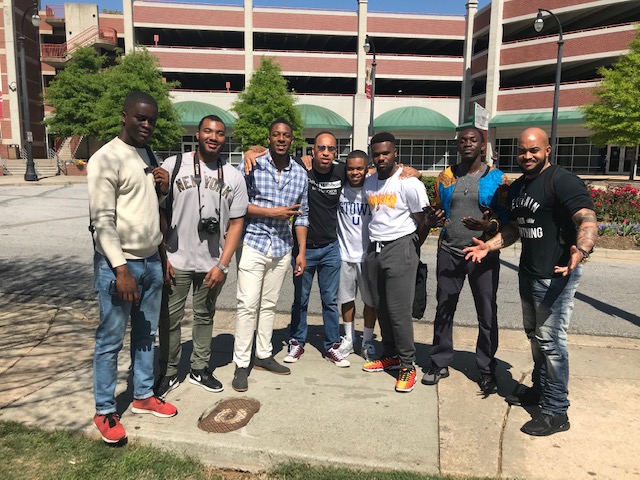 Curtis Valentine was a newly-appointed, at-large member of the Prince George’s County (Md.) Board of Education in 2013, a position that led him to visit schools all over the county, especially during graduation season. He’d meet high school seniors and made sure to always ask where they planned to attend college.

“The number of students who said they planned to enroll in community college was astonishing,” Valentine said.

The reasons students offered for choosing community college, he said, usually were some combination of low high school grade point average, high costs of four-year colleges and needing a year or so to figure out what they wanted to do in the future.

Valentine, a 2000 graduate of Morehouse College in Atlanta and an active member of the college’s DC Metro Alumni Association, also was serving as recruiter for Morehouse in Prince George’s. It was in that role as volunteer recruiter that the number of graduating seniors opting for community college shook Valentine.

“I realized that Morehouse was missing out on a large portion of the county’s young men graduating from high school,” Valentine said.

That’s when he came up with the idea of the Prince George’s Community College (PGCC) to Morehouse Pipeline, a program that offers male students at PGCC individual and group mentoringon topics such as paying for college, choosing a major, upgrading academic performance and navigating the Morehouse application process. The program sponsors an annual Morehouse Pipeline Brunch that includes speed mentoring sessions and panel discussions featuring Morehouse alumni.Every April, the program supportsfour student participants with Experience Morehouse, a trip to the campus in Atlanta where they shadow current Morehouse students for three days, eat in the cafeteria, meet with senior administrative staff from offices including admissions, financial aid and housing, sit in on classes and attend social activities.

“It provides them with a pretty good idea of what it is like to be at Morehouse,” Valentine said.

About 81 percent of students across the United States starting community college say they want eventually to earn a bachelor’s degree or higher, according to a study from the Community College Research Center at Teacher’s College, Columbia University. But only about 14 percent of those students transfer to four-year colleges and earn a bachelor’s degree within six years, according to the report produced in 2016 in conjunction with the Aspen Institute College Excellence Program and the National Student Clearinghouse Research Center.

In states with the highest numbers of community college students transferring to four-year colleges and earning a bachelor’s degree within six years, only about 20 percent of students do so, according to the same study.

“So many of our students at PGCC just need a vision for their future, exposure to possibilities,” said Valentine, who in addition to being on the county school board is an adjunct faculty member at PGCC.

His familiarity with the community college helped to make the PGCC to Morehouse Pipeline a reality. He knew the community college had a program for male students, the Diverse Male Student Initiatives (DMSI). The year-long program aims to help young men focus on self-improvement and develop leadership skills. Brian Hamlin, the director of DMSI, was key.

“Curtis talked with me about how Morehouse alumni in the area could get involved as mentors,” Hamlin said. “What he proposed fit with the DMSI goals of developing leaders and promoting community involvement. So, we and leadership at PGCC made it happen.”

Since the PGCC to Morehouse Pipeline program launched, 16 students have made the Experience Morehouse trip with expenses covered by the D.C. Morehouse alumni chapter and a matching grant from the Community Foundation in Prince George’s County, Inc. Morehouse College provides cafeteria passes for the visiting students. A dozen of the 16 students have applied for admission to Morehouse. The school accepted eight of the applicants, five of whom have enrolled.

The numbers are small, relatively. But Valentine sees potential for growth in the PGCC to Morehouse Pipeline, specifically, and with other HBCU alumni chapters around the country who could start similar programs. He offers this advice to other HBCU alumni:

“This spring our first Pipeline alumnus will graduate,”Valentine said. “His name is Darrell Williams, and he is a Phi Beta Kappa, an Oprah Winfrey Scholar and has started his own business, the AUC Agency.”

Other current Morehouse students who participated in the program include Zachary Jackson, who is a UNCF Scholar, and Golden Daka, a UNCF/Footlocker Scholar who currently has the second highest GPA in his class.

“The year I spent in the PGCC to Morehouse Pipeline helped me to realize I had to take life more seriously,” said Daka, a Morehouse junior who is majoring in psychology and plans to attend law school. “The mentors helped me to see what I was not doing. They made want to work harder. I still talk to Curtis [Valentine] and Brian [Hamlin] to this day. We talk about anything…life, experiences.

“Without the program, I would not have ended up at Morehouse. I would definitely say the program is magical.”