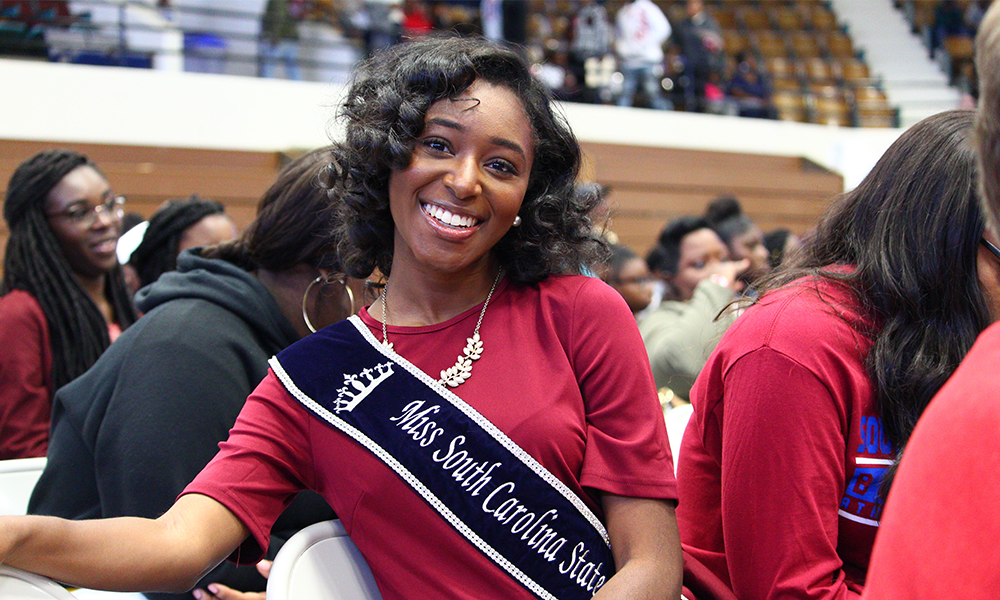 From the cobble-stoned streets of an Italian city to the charm of its Romance language to cooling down with gelato on a hot summer day and feasting on pastas and pizzas to your heart’s content, a summer in Italy is always an adventure. For Teonna Breland it was all that and more.

Inspired by her sister who studied abroad in Spain, Breland decided to do the same. As a fashion merchandise major at South Carolina State University, she focused on countries that breathed fashion. So, instead of Spain, she chose Italy, one of the fashion capitals of the world. For two summer months this year, Breland worked as an intern for Sera Fine Silk, a menswear company in Milan.

“It was hands on. We were preparing for a huge trade show in Florence, Italy,” she said, “and it was called Pitti Uomo.”

The trade show is a bi-annual event held in Florence that showcases men’s clothing and fashion collections. Its 2018 summer show, Pitti Immagine Uomo 94, was held from June 12-15.

The preparation for the show, Breland said, was hectic. But she hit the ground running.

That kind of bustling environment is something not uncommon to Breland. As the incumbent Miss SCSU for the 2018-2019 academic year, and a senior in the honor’s college, she knew how to work efficiently under pressure. This came in handy when she had to do research on the show while simultaneously checking off long to-do lists and circumventing language barriers.

“If I wasn’t using dialogue, I was demonstrating. That was hard,” Breland said. “That’s when you have to start thinking creatively – how can I get this person to buy this product without saying too much but allowing them to know that this is the product they have to have?”

To help the interns assimilate the Italian culture, they took cultural seminar classes where they were taught Italian and how to work in corporate Italy. But, as the only black woman in a group of predominantly white students, Breland figured she would have to work harder than her peers.

Her persistence to break stereotypes and to be an example of what a strong black woman is came from her faith and her mother. It was most evident after what she described as the lowest point during the internship.

After Breland had asked how to use an analytics application, her boss reproachfully questioned her capabilities as an intern. Deflated and in tears, she called her mother who reminded her that she had what it took to complete the internship and encouraged her to pray.

“I’m not going to say that it was easy; it definitely wasn’t,” Breland said. “I was constantly learning new things about myself and every day before I would walk into my internship, I would always pray, ‘God, help me to control my emotions and help me to listen before I speak,’ just to help me to focus on my work and not really the environment around me.”

And focus on her work, she did, even staying overtime on many days. She worked alone most of the time so, she had to figure many things out on her own including how to use the metro station.

“We had work all day, every day and I appreciated that as well because I don’t know what to do with too much time,” she said.

Nevertheless, she still found a balance between work and play. Even though she worked alone during weekdays, Breland had time to explore the country with her fellow interns. She shared an apartment with seven of them and each had her own room.

“These apartments were huge!” Breland exclaimed. “It was absolutely amazing. When I got there, I thought, okay, I’m living lavish!”

The colleagues planned weekend travels to explore Italy and cities in the neighboring countries. “Every week we all had different traveling schedules: somewhere in Greece, somewhere in Iceland, somewhere in Paris, and I think that was the best experience.”

However, the most memorable of these trips, she said, was one to Barcelona, where she went jet-skiing, tubing and visited the Magic Fountain of Montjuïc.

“It had to be the best time ever!” she laughed. “It was different, but it was amazing. I appreciate a lot now, looking back on it. Wow! My summer, I really was all over Europe by myself and that was dope!”

At the beginning of this experience, Breland said she went with an open mind, ready to learn and grow. By the end, she learned a lot about branding, social media analytics and networking. She proved to her boss, Francesca Serafin, that she was capable and qualified to be an intern at Sera Fine Silk.

“At the end, I realized she’s a woman in the field of men, so she has to work twenty times harder anyway,” Breland said. “I appreciate her for pushing me so hard.”

But most importantly, she learned a lot about herself and drew strength from her faith.

“It was the summer of preparation and growth,” she said, nodding and smiling. “It prepared me for my position now, working with other people.”

One of her movements as Miss SCSU is ‘POW,’ meaning the Power of Woman. Through fashion, she wants women to feel powerful and free.

She looks forward to the future. “Biggest goal for me is to create my own business, multiple businesses besides just fashion,” she said. “I really want to do something that’s going to help out the community.”

Her advice to anyone considering studying abroad? “Absolutely do it and take full advantage. Don’t stay in just one place; go everywhere, explore everything.”