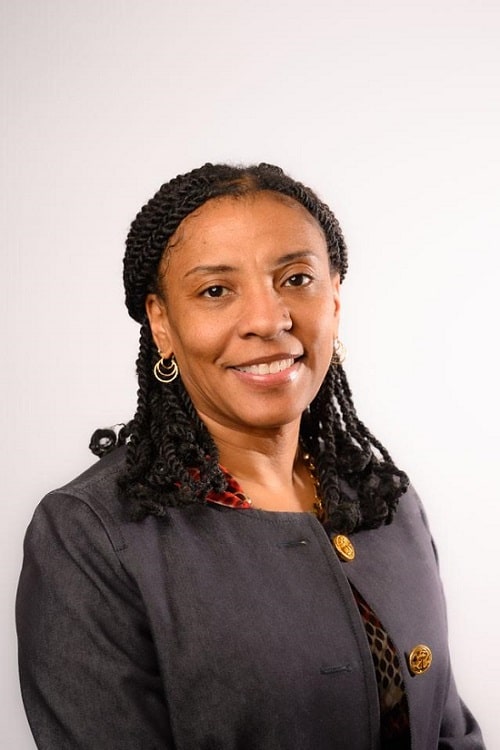 It was fate that led Michelle Jones (now Felder) to the sport of track and field and faith that kept her there. One day on a walk home with her cousins she took the normal shortcut across a field but happened to notice some kids running and she decided to join. The coach there saw her talent and told Jones to come back the next day. And she kept returning for the next 11 years as a member of the Ed Waters Track Club in Baltimore, Maryland.

“I ran my way out of the ghetto and on to the campus of Howard University,” said Jones.

As a junior in high school Jones was highly recruited but most of the coaches seemed to wither away after she suffered from a hamstring injury. But Coach William “Bill” Moultrie from Howard continued to adamantly pursue her.

“One day I came home from school and he was sitting in the living room with my mom,” said Jones. “He didn’t give up on me, and my decision to go to Howard changed my life.”

She says Coach Moultrie saved her life. His strict coaching style provided her with the structure needed to achieve the success he knew she was capable of.

“I literally had a chair in his office with my name on it,” said Jones.

While running on the track team, Coach Moultrie pushed her to become a quarter miler, an event that would make her a 5 time NCAA All-American. She still holds the school record with a time of 51.91.

“We didn’t have the high tech athletic training facilities but Coach Moultrie reminded us that we deserved to be at the big meets,” said Jones. “He told us all we needed was a lane to compete in.”

And Coach Moultrie made this known even at practice. The Howard Track and Field team was filled with elite runners who were determined to live up to their potential. Jones had teammates like Oliver Bridges and Olympian Suzie Tanefo who pushed themselves at meets and at practice.

The team was truly a family unit with Coach Moultrie as the guiding father figure for them all. He found a way to encourage Jones to stay at school and a part of the Bison family during times when she felt the place she needed to be most was at home.

“I worked a job and helped to pay for my family’s lifestyle, so when I got the call that the lights were being cut off or that they were struggling to pay the bills, it really just made me want to go home,” said Jones.

But Coach Moultrie reminded her that her college degree would help her break generational cycles and to provide more for her family. And after graduating that is exactly what she went on to do. Jones is now a math professor at Western Kentucky University where she motivates other students to do the same. The current coach at Howard, David Oliver is also using her story to inspire future runners.
“Howard has had over 70 All-Americans and 7 Olympians don the blue and white and now that I am able to follow in the footsteps of our legendary coaches, one of my missions is to make sure we tell our stories so that their names ring out for generations to come,” said Oliver. “Michelle is a cornerstone of the program as well as an aspirational figure with a brilliant story that should be told.”
Continue Reading
You may also like...
Related Topics:Featured, spotlight