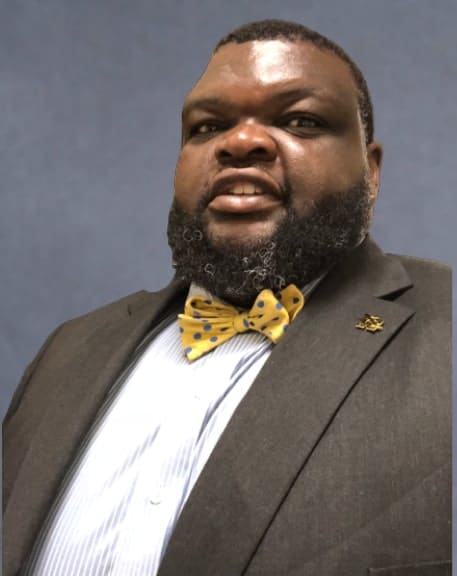 Jamie R. Brunson is an 19-year veteran in education, and he currently serves as Proud Principal of Fairfield Middle School. Jamie has served as Assistant Principal of Instruction at Fairfield Central High School, Winnsboro, SC, Director of Guidance and Assistant Head Football Coach at Lower Richland High School, Hopkins, SC, where he was named the 2010-2011 Teacher of the Year. The Cameron, SC native is an alumnus of South Carolina State University, where he obtained a B.S. in Mathematics Education, an M.Ed. in Counselor Education, an Ed. S. in Educational Administration, and is currently a candidate for a Doctor of Education degree. While at SC State, Jamie was a member of the World Renowned Marching 101 Band, where he played tuba and sousaphone, and held the position of section leader for multiple years, and sat as principal tuba in the SC State University Wind Ensemble.

Brunson continues his love for music, by freelancing as an event DJ. Jamie first spun his way on the Disc Jockey scene in 2015. He has always been one to express himself through music. As he has continued to develop his craft as a disc jockey, he has established a reputation as one of the most innovative DJs of this generation. Through Rap, Hip-Hop, R&B, Jazz, NeoSoul, Oldies, Pop, Soul, Funk, Gospel, Top 40, and other genres, SC DJ Worm 803 is widely regarded as the “Administrator of the Turntables.” As a skilled DJ, who does it “for the culture”, he is one of the most sought-after disc jockeys in the Southeastern region.

Jamie has a passion for mentoring the youth, especially African-American males. He has a desire to help to guide young men into becoming good men who are productive contributors in society. He is a member of the South Carolina Association of School Administrators, South Carolina Alliance of Black School Educators, South Carolina Education Association, Phi Mu Alpha SINFONIA, Tau Beta Sigma (Honorary), Life Member of Omega Psi Phi Fraternity, Inc., where he currently serves as Basileus (president) of the Epsilon Omega Chapter of Orangeburg, SC, Prince Hall Free & Accepted Masons, Ancient Egyptian Arabic Order Noble Mystic Shrine, and The 100 Black Men of Greater Columbia. He is married to the former Teesa Johnson of Bamberg, SC, and they have one daughter, Kennedy. They are members of Mount Carmel Baptist Church, Cameron, SC, where Jamie serves as a Deacon, Assistant Treasurer, and Director of all choirs.