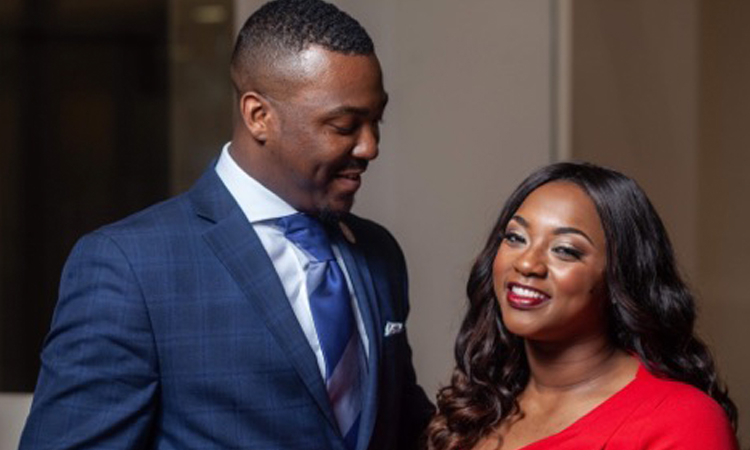 Grant Us This Day: Millennial Power Couple by Kimberlei Davis

Grant Us This Day: Millennial Power Couple by Kimberlei Davis

There’s George and Weezy, Will and Jada, Jay-Z and Beyonce, Harry and Meghan and Barack and Michelle.

All #couplegoals right? But don’t forget Hamilton and Alana.

Their love story reads like a Hallmark movie script.

For the newlyweds, their union was seemingly sealed and written in the stars while each were still in diapers.

In 1990, Hamilton’s maternal grandfather the late Reverend W.J. Nelson christened the former Alana Simmons at Chappelle Memorial A.M.E. Church in Columbia, South Carolina at the insisting of her grandmother.

Both would earn music scholarships by becoming members of rival collegiate bands, Hamilton a member of the Zeta Eta Chapter of Kappa Kappa Psi and two-time Drum Major for the Marching 101 at SC State and Alana as a #VikingPride soprano section leader on the choir .

If all that didn’t provide an opportunity to meet, they crossed into the culture of Divine 9 having had family members who were either their prophyte or neophyte of Omega Psi Phi Fraternity, Incorporated (Xi Psi) or Delta Sigma Theta Sorority, Incorporated (Delta Chi),

But even with all this, ‘Coleman Love’ and more, their paths never crossed.

On the heels of multiple high-profile officer-involved incidents: the 2014 shooting of Levar Jones and the April 2015 deaths of 50-year-old Walter Scott and 25-year-old Freddie Gray, Hamilton and Alana say they were here for all of the progressive movements that were developing among people of color and those who spoke truth to power.

On a hot summer’s night, fate would bring the couple whose lives were already intertwined together – permanently.

The heartwrenching often irrevocable pain the Jones, Scott, and Gray families felt would soon ring Alana’s doorbell and Hamilton would be there to help her pick up the pieces.

Neither say they were “looking for love,” but Hamilton says it was while watching an MSNBC interview following the massacre at a Charleston church on June 17, 2015, that he was first drawn to Alana.

Decades after first meeting on church pews as infants, Hamilton would re-introduce himself to his soon-to-be-bride at the funeral of The Honorable Reverend Clementa C. Pinckney.

“Besides the fact that she was stunning and gorgeous, it was the grace she showed and the message behind forgiveness that all the families exhibited that was profound and unfathomable.”

While the world mourned the deaths of Pinckney and the others known as the ‘Emanuel 9’ at the hands of a self-avowed white supremacist, Alana put her faith in action to create the movement #HateWontWin, Incorporated in honor of her paternal grandfather, the late Reverend Daniel L. Simmons, Sr.

It was the Alabama A&M MBA graduate’s persistence in the world of the “DMs” and art of sealing the deal following the funerals, that was cupid’s arrow to Alana’s heart.

“It was really an overwhelming time for our family, knowing that our loved one was killed in a hate crime,” Alana said. “Thousands of people reached out in person and via social media in the wake of the tragedy, but then the calls and messages dwindled down, but Hamilton came strong with the follow-through.”

Hamilton slowed me down and helped me  see the value in people.

“I watched Hamilton in the weeks and months that followed. How he interacted with family, business associates and even strangers and he always placed a value on their existence. I saw how he loved on his dad when he got sick shortly after the massacre and I knew this was a man worth getting to know.”

Alana has a heart of gold and can make mean homemade soups, stuffed chicken, seafood, the whole nine without box recipes, Hamilton said.

He offers this advice to single men who pass on women who are “too phenomenal.”

Know who you are first, because you’ll damage someone else trying to find yourself.

“You can accomplish many great things as a man, but all of that is operating out of unmerited grace. Your wife is your favor, so just imagine how much further you’ll go with your favor.”

The Grants say they proudly hail from an HBCU and will forever say their names.

Hamilton teases his wife that she missed out by not attending SCState.

The Virginia native said “our meeting was truly an act of God, because I never went to a homecoming at State.”

Hamilton, 30, is the youngest serving member on the Board of Trustees at his alma mater, following in the footsteps of his father.

“I can remember when my father served on the board in the 90’s, I was so mesmerized by the Marching 101 and the guys with the big hats.”

A chance meeting with the legendary Ronald J. Sergeant and invitation to sit with the drum majors and the late Eddie Moe as a child,  forever etched garnet and blue in the loyal son of SCSU.

Hamilton comes from a lineage of Bulldogs as does Alana (both parents Daniel Lee and Arceila Simmons, Jr. attended SCSate), but the former campus queen and music education major set her sights on Elizabeth City State University.

Alana, 29, was the first Miss Elizabeth City State University to also capture the title of Miss CIAA and currently serves as the youngest member of the school’s foundation board.

If you’re following #AlanaIsMyRealtor on IG, you know Alana is about getting her coins.

For years Alana taught in Virginia as a certified public school teacher, but has found flexibility in real estate and the ability to empower people with home ownership.

Their social media bios are a brand all by itself, but both are well versed in Scripture and savvy when it comes to what it takes to support and maintain HBCUs.

“The biggest misconception about South Carolina State University is that we’re closing our doors,” Hamilton said. “We as a collective HBCU family find ourselves fighting the narratives that we are not relevant.”

As long as there are PWIs, there will be the need for HBCUs, the Grants noted.

Both agree, “You know an HBCU grad when you see one. They are confident and unapologetic.”

“I needed to go to an HBCU,” Alana said. “Even though I was a good student, I became a great student. The experience built character, I learned how to work with people, be resourceful and walk into a room regardless of how my hair looked and still exude confidence.”

The president of Grant Business Advisors, LLC and former graduate assistant of AAMU’s president Dr. Andrew Hugine, Jr. said, “People would be amazed at the strides we are making at South Carolina State to make it a competitive university and set vision for the future.”

From the wardrobe slay to community activism to guest appearances on ABC, CBS, NBC and other national broadcast and print media outlets, the couple like to do things together.

Hamilton and Alana are both graduates of Leadership Columbia, they serve as president and vice-president of the Columbia Urban League Young Professionals and were recognized by Columbia Business Monthly as Top 35 and Under.

Among a host of community involvements, the Omega Man is on the advisory Board for Famously Hot New Year for the City of Columbia, is a 2017 graduate of The James E. Clyburn Congressional Fellowship and was the youngest serving member of Bethel A.M.E. Church’s Trustee Board.

In 2018, Alana who holds a Master of Arts in Music Education and from Norfolk State University, was honored by the King Center with the Coretta Scott King A.N.G.E.L. award and was recognized as a Top 20 Under 40 by the South Carolina Black Pages.

Alana is actively building her real estate business. She is an agent with the Keller Williams Realty in Columbia, South Carolina.

Hamilton is issuing a rallying call for millennials to seek office in elected roles and to go after available seats at the table.

Power couples who maintain highly successful careers can seem intimidating and an unattainable goal, reserved for the rich and famous, but Hamilton and Alana have shown that their relationship started way before they knew it began. It was built on adversity very early on and they saw the best in each other.

If you work to improve yourself and as a pair; support each other fully; compromise and don’t compare your relationship to other couples, then you’re on your way to #couplegoals.