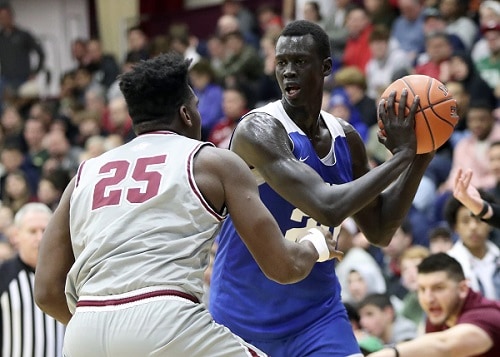 Standing at 6 feet 11 inches tall, Makur Maker is readily recognized as a force to be reckoned with on and off the basketball court. In his sport of choice he is known for his ability to easily shoot 3 pointers or serve in the post after receiving an entrypass. Maker was noticed for his talent early on in his high school career at Hillcrest Prep.

Major schools like UCLA, Kentucky, and Memphis offered him a scholarship his senior year but instead of choosing a school with a history of winning he committed to Howard University. The school hasn’t finished with a winning record in over 18 years. But remaining undefeated wasn’t Maker’s goal, he’d done that before. Instead, Maker wanted to make a statement that would be remembered for years to come. On July 3, he made the public aware of his very personal decision.

“I need to make the HBCU movement real so that others will follow,” Maker wrote. “I hope I inspire guys like Mikey Williams to join me on this journey. I am committing to Howard U & coach Kenny Blakeney #MakerMob”

Maker will play under Coach Kenneth Blakeney who had his first season at Howard lastseason. Though the year ended with the team going 4-29, Maker remained undeterred.

“I want to bring a championship to Howard University, that’s my top goal,” he said. “He’s [Coach Blakeney] built to win. He knows how to build a program. Being around theplayers they want to win.

Maker was inspired to commit to being in an environment where people who look like him were triumphant. He visited Howard during homecoming in October of 2019 and was amazed by what he observed.

“One of the first things that went through my mind as I walked around was, ‘this feels like family.’ Black people like me for as far as you could see,” said Maker. “—students and alumni —all doing great things. Highly motivated people, successful people, and I tried to talk to as manyof them as I could because I wanted to pick everybody’s brain.”

This was a sight that he was set on making the rest of the world see, especially after the social injustices happening on the news across our country.

“That’s probably the knock on the nosethat made me do this. Because we’ve got to lead. Everybody’s got to take a stand and do something. If I’m doing this, it’s going to bring awareness to the choices that we have to make. As time goes on, we have to make choices that are responsible and to better our community. With everything that’s going on in our country today, that definitely had a big impact on it,” Maker told Pablo Torre on ESPN Daily.

And although he is the first five star recruit to go to an HBCU in over 40 years he hopes he is not the last.

“The reason behind my decision? I dare to be different, and I always consider myself to be a leader. And I want to change the culture,” said Maker.

But he has also beenvery direct about addressing the idea that he is settling for a space that will obstruct him from growth.

“People also sleep on the competitive nature of the MEAC [Mid-Eastern Athletic Conference]. The pace and open flow style of play of the MEAC is moresimilar to the NBA, in my opinion,” said Maker. “It’s a read and react league, so it will definitely help me get ready for the NBA.”

All that his fans can do is wait for his next decision to shock the world.

“If I can help shift the culture by going to Howard —to a point where other players either join me or follow me —“what if” becomes “who’s next,” said Maker.

HBCU CULTURE: A Letter to The Freshmen
Jones Jets through Howard track and field Career