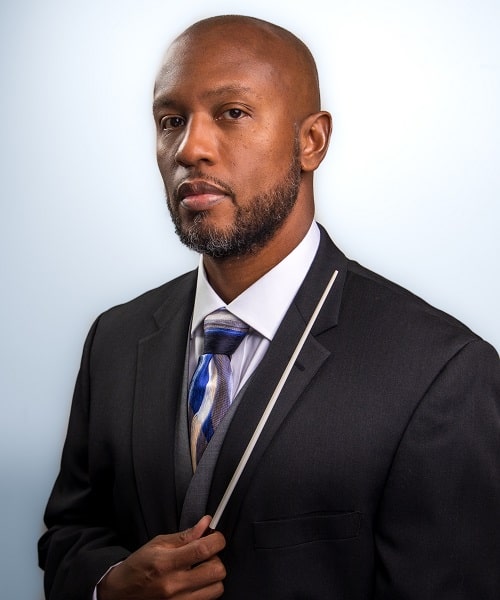 Dr. Thomas L. Jones, Jr. was born on Clark Air Base in the Philippines and grew up in Texas, New Jersey, South Dakota, North Carolina, and Virginia. Upon graduating from Kecoughtan High School in Hampton, VA, he entered Hampton University on a Presidential Scholarship and Band Scholarship. While at Hampton, he was a member of the band, “The Marching Force,” played Trombone and Trumpet, and also served as the Drum Major. He is a charter member of the Pi Beta Chapter of Phi Mu Alpha Sinfonia (Spring 1999), and he is also a Spring 2001 initiate of the Gamma Epsilon Chapter of Omega Psi Phi Fraternity, Inc.

For several years, Dr. Jones served as the music arranger, drill writer, and instructor for the Brooklyn “Steppers” Marching Band, who would go on to win a National High School Marching Band Championship and also appeared in the 2005 Macy’s Thanksgiving Day Parade. He would then go on to serve as the Chief Music Arranger, Show Designer, and Media Team Coordinator for the North Carolina A&T State University “Blue and Gold Marching Machine,” seeing five appearances at the annual Honda Battle of the Bands, as well as the 2012 Macy’s Thanksgiving Day Parade. In August of 2017, Dr. Jones assumed the role as the Director of Bands at Hampton University and led the band to its first ever appearance in the Honda Battle of the Bands in 2018, followed up by an appearance in 2020. The Hampton University band also performed in the 2020 New Year’s Day Parade and Celebration in Rome, Italy, and the 2021 Macy’s Thanksgiving Day Parade. The band’s drumline also performed in the 2019 Tournament of Roses Parade. In his first two years at Hampton University, “The Marching Force” grew from about 60 members to over 200.

In addition to these duties, Dr. Jones also serves in the U.S. Army Reserve. He was deployed to Iraq in 2009-2010 as a Psychological Operations Team Leader, and was also deployed to Afghanistan in 2011-2012 as a Human Terrain Team Research Manager, and more recently served as a Drill Sergeant in the Army Reserve. Some of his military decorations include the Army Commendation Medal, Commander’s Award for Civilian Service, Air Assault Badge, Drill Sergeant Badge, and the Military Outstanding Volunteer Service Medal. He was selected as the 34th Infantry Division Special Troops Battalion Noncommissioned Officer of the Quarter in 2010 and the 4th Psychological Operations Battalion Noncommissioned Officer of the Year in 2011.