‘Tis the season of giving!

And what do you say when you receive a gift, let alone a $20 million dollar gift?

“We thank MacKenzie Scott for her investment into Claflin for its 151 years of academic excellence, student success, and long-term sustainability…and for believing in our mission and our vision.”

The $20 million donation from the philanthropist makes it the largest individual donation to the Historically Black College (HBCU) since it was founded in 1869.

During a press conference on Wednesday morning in Ministers Hall, Dr. Warmack said the donation is game-changing.

“This gift will put Claflin in a different position,” Warmack said. “As you know COVID-19 has impacted the world and higher education in a significant way.”

The funds will be used for student success and retention, “Which will continue to allow us to be ranked as one of the top ten HBCUs in the country.

U.S. News and World Report also ranked Claflin University ninth overall among the schools in the Best Regional Colleges in the South rankings – the only HBCU to make the list.

Secondly, Warmack said the funds, “Will help strengthen our gates and beyond our gates in the City and County of Orangeburg.”

He said students spend 78-82% of their time outside of the class and there’s a need to continue to develop a holistic college experience.

“That’s academically, personally, socially and for Claflin University that’s spiritually,” Warmack said. “This gift is the launch of a new state of the art student center.”

The student life center will be the living room for campus providing access and opportunities for residents of Orangeburg with hopes of addressing and supporting the city’s need for a movie theater and bowling alley.

“Beyond the borders of our campus, this gift will be transformational for the Orangeburg, SC community,” the school stated from its official Twitter account on Tuesday. 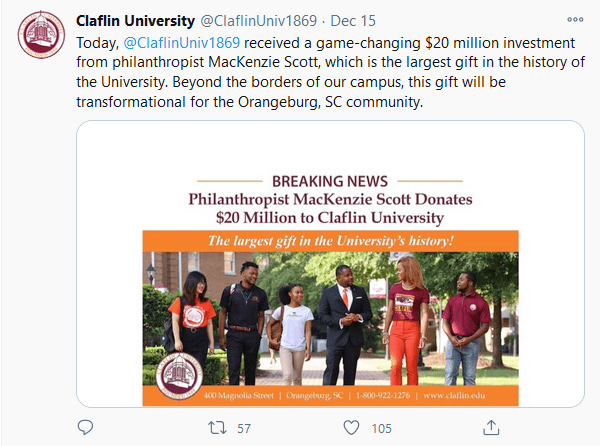 Lastly, Warmack said the funds will continue to, “Help us build our academic enterprise. The faculty, staff, students, alumni, and administration are what makes Claflin so special.”

Warmack is in his second year as the ninth president of the nation’s first Zoom university.

“Claflin has been the best-kept secret for too long and this donation from ms. Scott allows us another opportunity to be on a national platform for the outstanding work that we’ve been doing, our commitment to excellence, and our strategic initiatives to ensure that students don’t just graduate, but that are gainfully employed.”

Among the beneficiaries of the mom and writer’s unprecedented $4.158 billion generosity to 384 nonprofit and charitable organizations, are:

In a blog post on Medium, Scott wrote This pandemic has been a wrecking ball in the lives of Americans already struggling. Economic losses and health outcomes alike have been worse for women, for people of color, and for people living in poverty. Meanwhile, it has substantially increased the wealth of billionaires.

Scott’s charitable contributions come on the heels of her signing the Giving Pledge, a philanthropic campaign founded by celebrated investor Warren Buffett, in May 2019, vowing to donate most of her wealth to philanthropic causes over her lifetime.

This isn’t the first time that the ex-wife of Jeff Bezos, Amazon’s founder, has dug into her billionaire purse to donate to HBCUs, in July, Howard University, Xavier University of Louisiana, Hampton University, Morehouse College, Spelman College and Tuskegee University were recipients of Scott’s generous donation.

Last year, Scott pledged to give the majority of her wealth back to society and it looks like she is continuing to make good on that promise.

In addition to the historic announcement, it’s been a great few weeks for Claflin that touts creating globally engaged, visionary scholars.

Recently, the school received a $1.5 million grant from Dominion Energy which will help increase the endowment to offer scholarships and upgrade technology capabilities to assist in virtual teaching and learning environment.

Over the weekend it was announced that sophomore Otiana Thompson won an $8,500 scholarship as the reigning national champ of the Black College Quiz.

The history major from Columbia, South Carolina crushed the competition by showcasing her knowledge of African American history and culture.

If you missed the episode of the quiz series that airs on Bounce TV and is hosted by media personality Thomas Miles “Nephew Tommy,” watch it below:

Amid the crippling pandemic, many are in need of holiday cheer now more than ever.

This win for Claflin is a win for all HBCUs.

“The donation  reiterated the importance of HBCUs and what Claflin means not just for Orangeburg or the state of South Carolina, but this country.”

“We thank Ms. Scott for investing in this institution as we change the world one visionary at a time.”